Per Karlsson is a Swedish professional freelance photographer. Photography has been a passion from early years and he likes to see the world through the viewfinder of his camera. Began his career as a press photographer at the newspaper Östra Småland in Kalmar and after that as a portrait photographer in his hometown. Known for his technical skills working for Canon Svenska AB as a product specialist since 1989. During his work for Canon he have also been shooting pictures in various events like Olympics, World & Euro Cup football, World & Euro cup Athletics, World cup Ski, Cross country World cup and local sport events.

Specialized in sport photography and particularly sport action. Wedding photography is also a genre where he along with stills also video captures the wedding ceremony and party.

He is connected to the agency Bildbyrån STR, Bildbyrån, IBL and the newspaper Expressen 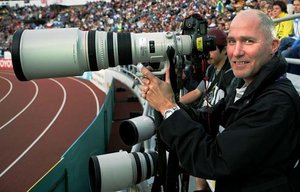